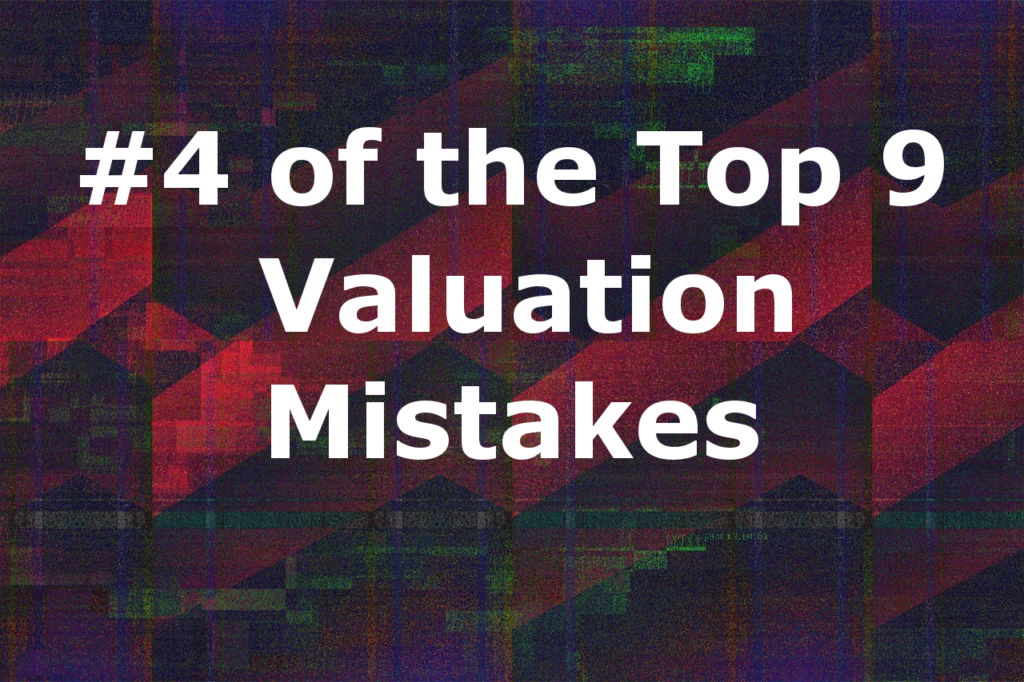 The top #4 valuation mistake takes us into a discussion about confusing growth Capex with maintenance Capex. Many analysts miss the relationship between Capex, depreciation, and sustainable growth. Which is why we’ll review these aspects within this chapter.

First though, a quick recap of the full list of Top 9 Mistakes.

Capex stands for capital expenditure. It is the money spent acquiring fixed assets or repairing or upgrading existing assets. Of course, Capex is a long-term investment item.

If you bought a can of oil to work for a piece of capital equipment, it might be something that is necessary to keep the machine running, but it’s not a long-term addition to that asset. But if you build an extension onto a production line, then that is considered ‘upgrading an existing asset’ as it’s a long-term upgrade.

Because fixed assets last longer than one year, the Capex cost is not fully charged as an expense in the year that’s it’s paid or incurred. So, Capex is capitalized over the life of the asset. This appears as an annual depreciation charge in the P&L which accumulates on the balance sheet.

Let’s consider an example of a company that buys a 100-dollar asset with an estimated lifespan of five years (see Fig. 1). The gross value of that asset never changes; it’s one hundred dollars. That’s what you bought it for.

We can arrive at the annual P&L depreciation charge by taking $100 divided by 5 years and saying, “Every year, this is going to depreciate by $20.” And, therefore, we also have an accumulated depreciation that starts to build in the balance sheet. This is also how we end up with a net asset value that’s constantly falling. In this example, if this company really wanted to grow, the problem that it would have is that this asset is basically worth nothing at the end of five years.

But in an economic sense, let’s say that they were right. The five years have passed, and the machine is dead. To make the machine last those five years and still produce at the same level, we would have to invest how much?

Twenty dollars! If we invested $20 in that machine every year, we would offset the amount that’s depreciating. And that’s the concept of depreciation.

We can look at that in more detail. But let’s look at the difference between the change in gross fixed assets and Capex.

There are two Capex items in financial statements. Firstly, there is a change in gross fixed assets and secondly, there is the Capex line on the statement of cash flows. Let’s take a look at Apple Inc. as an example here:

As you can see, the 2017 change in gross fixed assets of US$13,831m does not match the Capex in the cash flow statement of US$12,451m. For various reasons, these items almost never perfectly match. In fact, I’ve never seen it match completely; and I have a database of almost every listed company in the world that we work on in my business as well as in the Valuation Master Class.

One simple reason is that, by definition, the statement of cash flows is only the cash that’s being spent currently.

Let me explain further. I went to visit a factory in Thailand once, and they showed me a lineup of these massive injection molding machines and the guy told me he got two-year credit terms for them, meaning no cash was spent on the machines in the first two years.

Let’s consider the case of Apple Inc. again. In 2017, the change in gross fixed assets was US$13,831 million (as per the table above). If we look at the 2017 change in gross fixed assets, it does not match the Capex item in the cash flow statement which is US$12,451 million. It’s close, but there are many, many complicated reasons why it’s still different and this is what it’s pertinent to remember. Both ways of looking at Capex have value.

Let’s go back to my research on the 500 largest companies in Asia and their Capex spending in their cash flow statement. We can see that it started to come down in 2014 and 2015. But that’s the total amount of Capex that these companies are spending. 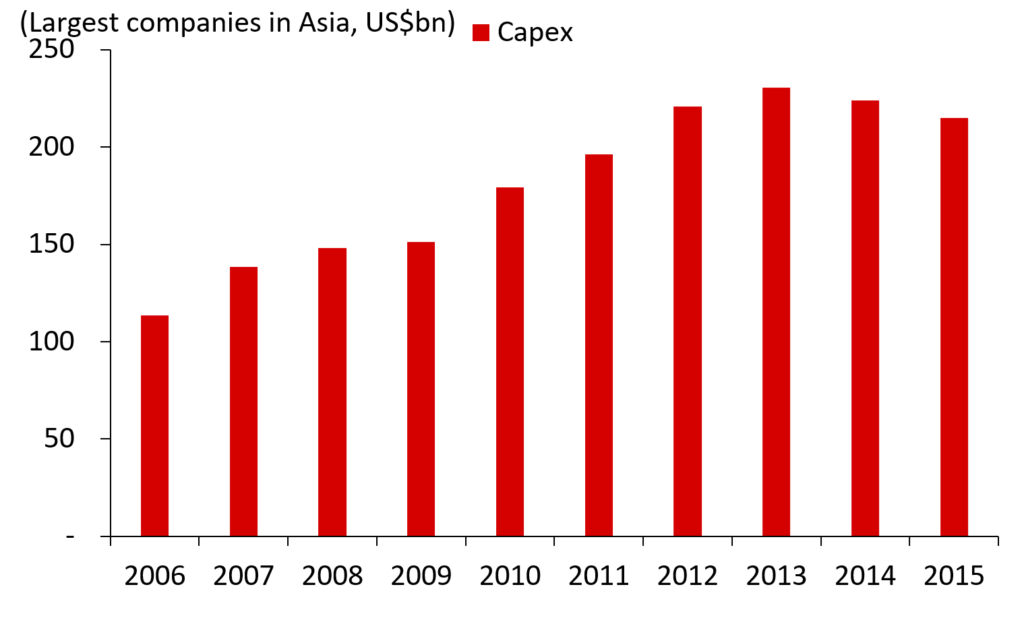 Now, let’s break that down into two parts. The first part is Maintenance Capex. We already looked at that a little bit earlier by looking at that depreciation of 20 and saying, “We’d have to invest 20 to offset the amount that it’s depreciating.” The second is Growth Capex. 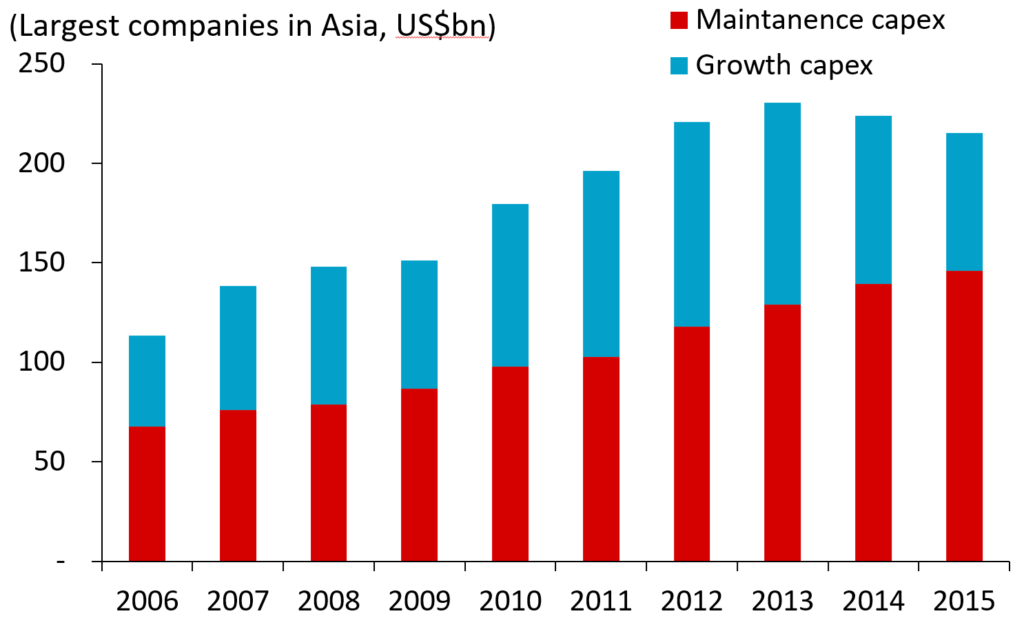 Maintenance Capex is spending to keep an existing asset producing at the same level—older machines will require a lot of additional work in this area. When a company builds a new part onto a machine, that would be an addition to or a Maintenance Capex spending. There are short-term outgoings that will be required for machine upkeep, remember the can of oil from earlier, but these are expenses only.

Now, if that happens, what would a company do with the old machine? It can be kept or sold. So, let’s say that the new machine cost $200 million, and the old machine sells for $50 million. Therefore, the Net Capex amount for that year is $150 million.

In Maintenance Capex, the annual P&L depreciation charge is a good rough estimate of what must be spent to keep an asset up and running. You could dispute the accounting standard related to depreciation by saying, “Wait a minute, why would you depreciate something over five or ten years when you have a machine that’s been running for much longer than that?”

For additional growth, a company needs to invest more than just Maintenance Capex. While Growth Capex has much more volatility, it is essentially the key to the future success of a company.

How to Avoid the Common Capex Mistakes?

Here are some general rules to help you avoid making this valuation mistake:

Up next in the series, I discuss forecasting drastic changes in cash conversion cycle. Watch this space.