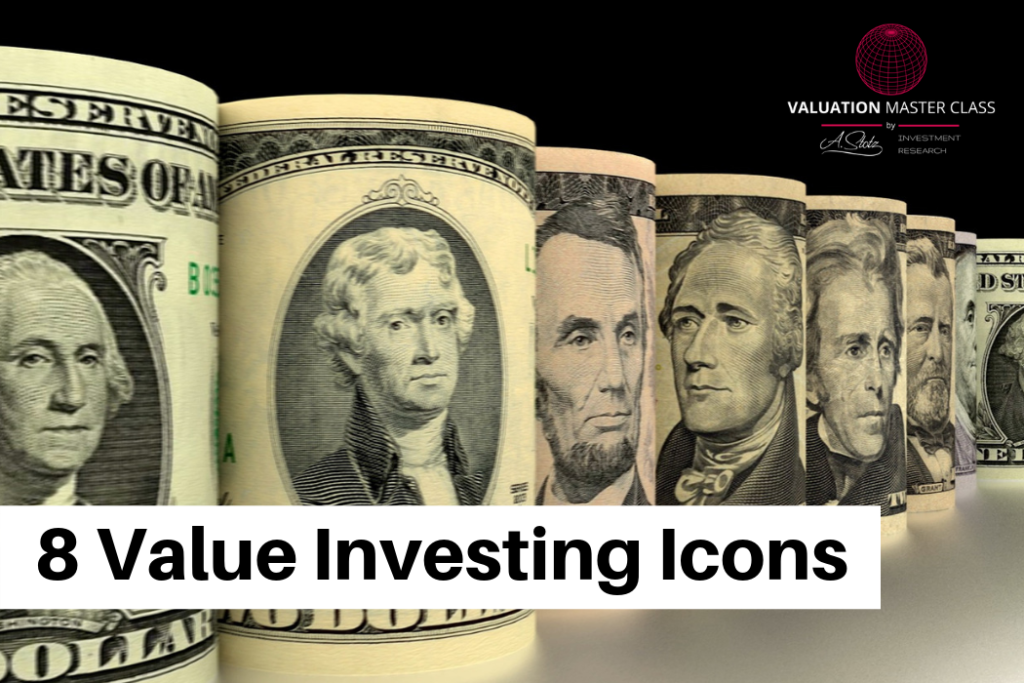 Value investing is the idea that you can achieve superior investment performance through buying stocks at prices that appear to be below the “intrinsic value” of the business. The origin of the tools to perform this analysis comes from Benjamin Graham and David Dodd’s 1934 book, Security Analysis. The investor tries to estimate the intrinsic value of a business through a variety of means such as price-to-book, price-to-earnings, tangible assets value, dividend discount value, or free cash flow value.

Learn how to estimate the intrinsic value of a stock. Join our next Valuation Master Class Live.

Benjamin Graham (1894–1976), the father of value investing. I remember the first time I read both of his books, first “Security Analysis” (with David Dodd, first published in 1934) and “The Intelligent Investor.” He developed the idea of buying stocks below their intrinsic value to limit downside risk and promoted the idea that stocks often trade at prices that do not reflect their intrinsic value. Graham’s techniques inspired Warren Buffett and had informed Buffett’s investment strategy for decades. Graham worked as an investment manager and as a lecturer at Columbia University.

John Burr Williams (1900–1989) was the first to demonstrate the concept of intrinsic value from future cash flow. In 1938 he published The Theory of Investment Value, based on his Ph.D. thesis, in which he articulated the theory of discounted cash flow (DCF) based valuation, and, dividend-based valuation. From 1927 until his death, Williams worked in the management of private investment portfolios and security analysis. He taught economics and investment analysis as a visiting professor at the University of Wisconsin–Madison; he also wrote many articles for economic journals.

Today, his privately held investment management company, Burr and Company, LLC. is run by his grandson, John Borden Williams. “Separate and distinct things not to be confused, as every thoughtful investor knows, are real worth and market price…”. He changed the focus to the underlying components of asset value. Developing this idea, Williams proposed that the value of an asset should be calculated using “evaluation by the rule of present worth.” Thus, for common stock, the intrinsic, long-term worth is the present value of its future net cash flows—in the form of dividend distributions and selling price. Through his approach to modeling and forecasting cash flow, he was also a pioneer of the pro forma modeling of financial statements.

Irving Kahn (1905–2015) was a follower of Graham disciple; he was Graham’s teaching assistant. He started working on Wall Street in 1928, and along with Graham and other investors, he founded the New York Society of Securities Analysts in 1937. His philosophy was that the frenzied trading of stocks on Wall Street is disconnected from the facts about the underlying businesses and that patience in investing is a virtue. He was a conservative investor, holding about 50% of his assets in cash and the other 50% in stocks.

Kahn founded the New York-based private investment firm Kahn Brothers Advisors in 1978 with two of his sons. The company adheres to Graham and Dodd’s margin of safety principle and invests in businesses that are priced below their true value. The managers focus on investments in seasoned businesses in depressed but well-established economic sectors. However, rather than focusing on large-cap stocks as Buffett does, Kahn Brothers focuses on small and medium-sized companies and even invests in securities through the over-the-counter market. Kahn Brothers’ emphasizes balance sheet data over income statement data and try to buy stocks that are selling at a discount to net working capital per share and adjusted per share book value and that have a low price-to-earnings ratio.

Sir John Marks Templeton (1912–2008) an American-born British investor, banker, fund manager, and philanthropist. In 1954, he entered the mutual fund market and created the Templeton Growth Fund. In 1999, Money magazine named him “arguably the greatest global stock picker of the century.” During the Depression of the 1930s, Templeton bought 100 shares of each NYSE listed company which was then selling for less than $1 a share, later making many times the money back when USA industry picked up as a result of World War II.

He pioneered the use of globally diversified mutual funds through his Templeton Growth Fund, Ltd., established in 1954. He attributed much of his success to his ability to maintain an elevated mood, avoid anxiety and stay disciplined. Uninterested in consumerism, he drove his own car, never flew first class and lived year-round in the Bahamas. His style was to “avoid the herd” and “buy when there’s blood in the streets” and to take profits when values and expectations were high. He was a Chartered Financial Analyst (CFA) charterholder.

Walter Schloss (1916–2012) worked with Buffett at Graham’s firm, Graham-Newman. In 1955, he started his investment management firm. He used company financial statements and the investment publication Value Line for much of his investment research. He sought companies where management was a major stockholder, the debt was low, and the stock was trading at a discount to book value. He did short stocks at a time and also held lots of cash when he didn’t see good opportunities. He diversified to an extreme for a value investor, sometimes owning more than 100.

Warren Buffett (1930–) was Graham’s student at Columbia and later worked for him. Buffett thinks of thinks that he is buying a company, not a stock. He loves the statement, “My favorite investment horizon is forever.” He became a millionaire around age 30. Follow Graham’s intrinsic value approach, with little focus on share price. He uses a more qualitative and concentrated approach than Graham did.

Graham preferred to find undervalued, average companies and diversify his holdings among them; Buffett favors quality businesses that have reasonable valuations and the ability for large growth. He considers the business, management, financial measures, and the value. He likes companies with high and sustainable return on equity (ROE) and little debt. He has a strong focus on free cash flow to equity, what he calls “Owner’s Earnings”. He attempts to estimate intrinsic value, using simple earnings forecast, sometimes based on a growth rate applied to average earnings per shares over the prior decade.

Christopher H. Browne (1946–2009) worked at Tweedy, Browne Company, an investment firm founded by his father, Forrest Tweedy, for 40 years. Tweedy, Browne’s investment philosophy is based on Graham’s teachings. The company serviced many of the most famous value investors. The company developed some value funds that have outperformed the S&P 500.

Seth Klarman (1957–) hedge-fund manager who founded the investment partnership Baupost Group. He occasionally holds large amounts of cash and is very risk-averse, basing his judgment on a companies’ liquidation value. He published “Margin of Safety, Risk Averse Investing Strategies for the Thoughtful Investor,” in 1991.

Learn the skills of a value investor!