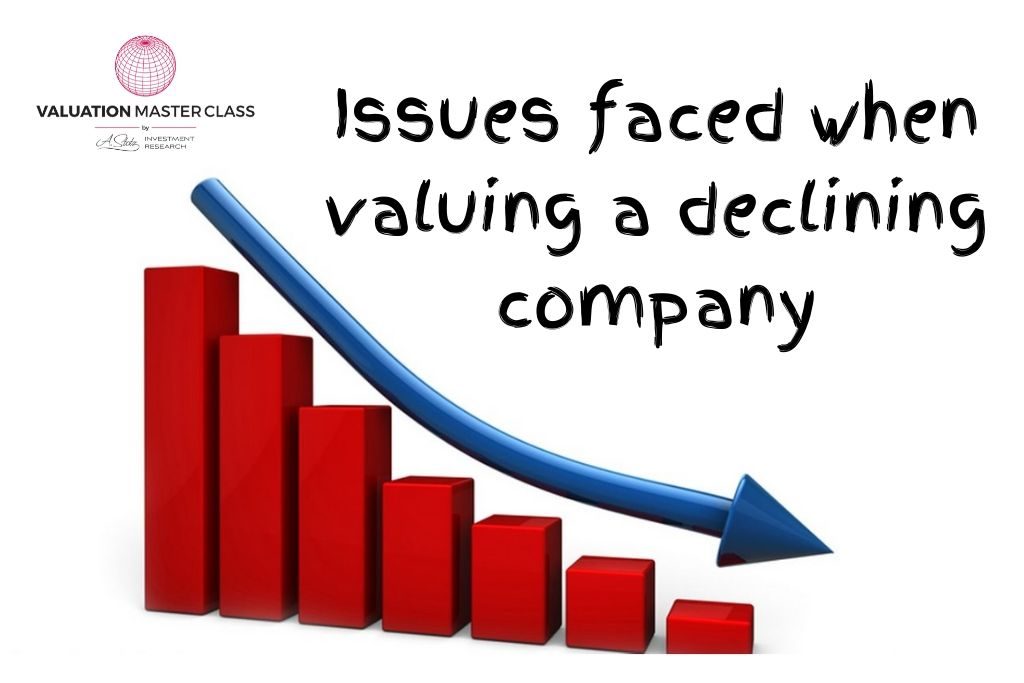 Characteristics of a declining company

In reference to Aswath Damodaran’s book “The Dark Side of Valuation Valuing Young Distressed and Complex Businesses,” it mentions that a declining company usually possesses the following five characteristics:

Another area to differentiate is on the liability side of the balance sheet. The declining company tends to over-leverage and usually doesn’t generate enough earnings to service its debt. Consequently, the declining company will face more distressing consequences from their debt burden, for example, higher debt servicing costs in contrast to the mature company.

The two most beloved valuation methods are discounted cash flow method (DCF) and the relative valuation method. As these valuation models are designed for a healthy company, it will pose unique challenges when used for declining companies.

Quoted from Wall Street Oasis.com, it describes discounted cash flow (DCF)  process by estimating the total value of all future cash flows (both inflow and outflow),  and then discounting them (usually using Weighted Average Cost of Capital – WACC) to find a present value of the cash flow.

Using the above process illustration, we can observe that projecting future cash flow is one of the essential steps in the DCF process. But due to , projecting future cash flow for a declining company is not as straightforward as it seems in contrast to a healthy company. From the earlier paragraph, we know that the asset might be earning less than the cost of capital for a declining company. This characteristic of value-destroying asset is not a frequent scenario that analyst faces every day. Due to unfamiliarity, it might lead to valuation errors.

Another common characteristic for a declining company is it ends to divest its assets. From a valuation perspective, divestitures of assets create discontinuities in past data. This causes difficulties in future performance forecasting since there is limited or no comparable historical information.

Next, we move on to the next component of the DCF — Weighted Average Cost of Capital (WACC). According to Investopedia.com, the formula for WACC is as below:

Another common declining company scenario that can cause fluctuation in equity and debt ratios is when debt Is not repaid proportionately to the debt increase. The subsequently higher debt ratio brings instability to the company.

Another DCF concern happens when the analyst wants to determine the terminal value of a declining company. In DCF, we assume that the company being valued is an on-going basis and will grow at the country’s economic growth rate plus inflation rate during a steady-state stage.

The characteristics of the declining company — include negative growth rates, unstable equity, and debt ratios, and potential failure added complexity to the traditional valuation methods. Analysts need to be extra careful when valuing a declining company as any issues that skew DCF will also skew relative valuation. These complexities pose extra challenges that normally won’t be found when valuing a healthy company.